at 3:11 PM Posted by Thisiscosmoscountry.com 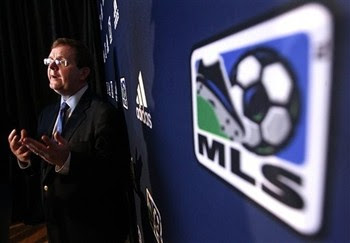 At a meeting today with the Associated Press, Mark Abbott, the president of Major League Soccer talked a bit about MLS expansion to NYC. While nothing new came out of the meeting, it is important to note that the league still in fact wants New York City.

"We would like (New York) to be the next (expansion) team, if we could," Abbott said, but identified the most substantial hindrance to another franchise in the area is a viable stadium solution."

Abbott later goes on to say:

"A potential ownership option in New York is the Wilpon family, who own the Mets, especially since Abbott cited Queens as a "favorable geographical spot" for a soccer-specific stadium. "We continue to have discussions with them about their potential involvement with (an expansion) team," Abbott said."
One curious thing is how Mr. Abbott speaks of the Wilpon family's INVOLVEMENT in an expansion team. Does that mean they will not be sole owners? Mr Abbott did of course speak of the Cosmos as another option.
While the league has always favored the Wilpon family, there still seems to be signs pointing towards a Wilpon/Cosmos partnership. Not only have the Cosmos spoken about meeting with the Wilpon family, but just this past week, in a New York Times Magazine article, Citi Field was mentioned as the potential location for a Cosmos "Inspirational Game".
As the parties involved continue to work behind the scenes, fans are patiently waiting for the answers to the questions Who? When? Where?

What Im thinking is this. I think Wilpon is going to allowed ONE Cosmos sponsored game to be play on Citi Field as long as Wilpon get minority share of Cosmos pie. Thats what Im thinking.

why is it that they cant just out and say Paul.K and the Cosmos are a runner? wilpon this wilpon that, the man just got out of the madoff scheme and almost took an offer to co-own the mets with donald trump it was so bad. im seriously starting to think that wilpon doesnt like us and that they only mention us cause we happen to steal the spotlight from their league.